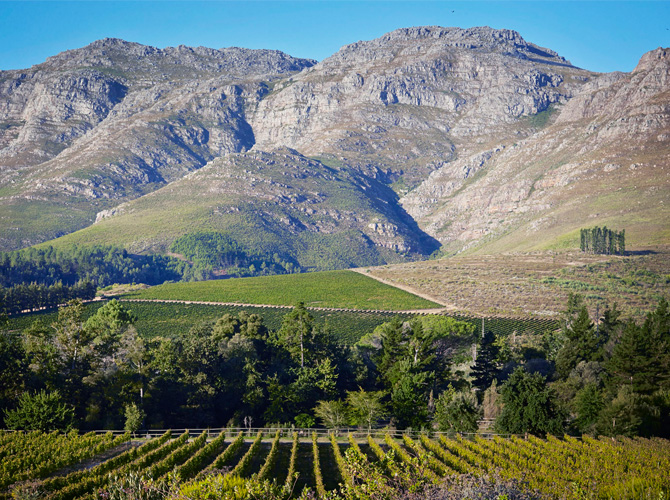 The de Villiers family has left deep footprints in the history of the South African wine industry through the centuries, and Kleinood and the Tamboerskloof wines are no exception.

Tamboerskloof is once again an integral part of the de Villiers family history as well as that of Cape Town and the Boland. The name Tamboerskloof  means the valley (kloof) of the drums (tamboer).

The Dutch settlers immigrated to the Cape in 1652 to farm with fruit and vegetables to supply the Dutch East Indian Company ships on their way to the east. Lookout posts manned with spotters were established on the hills and mountains around the Cape peninsula. The first spotter was placed where the suburb of Tamboerskloof lies today. These spotters drummed the message of an approaching ship from one lookout post to the next until the farmers in the surrounding valleys heard the drums and proceeded to harvest their crops and hasten to Cape Town harbour with their wagons in order to meet the ship on arrival.

Before moving to the Boland, Gerard, Libby and their two children, Spicer and Katharien, lived in this Cape Town suburb for 25 years. Thus, with the fondest memories and the need to acknowledge the happy years they had spent there, they named their wine Tamboerskloof.

Ruby red in colour with dark spices on the nose, the wine has aromas of violets, cold red fruit, cherry, plum and rose hip. On the palate flavours of strawberry, Turkish delight, bramble and goji berries lead to a full-bodied finish of earthy spice and lush soft tannin.

The Tamboerskloof John Spicer Syrah 2011 is a beautifully structured and balanced, dark-scarlet coloured Syrah with a magenta rim and a deep intensity. The nose develops with medium, but pronounced intensity, showing pure, red and black berry fruit, white pepper, plum preserve and chocolate éclair. On the palate, complex dry spices, loaded with complex plum and mulberry preserve with a white pepper finish. The wine finishes dry with great depth of flavour, elegant structure and firm tannins and a medium plus body.

A white-gold coloured Viognier with green apple, limes, almond blossom, tropical fruit and frangipani aromas on the nose. On the palate the wine has a luscious entry of vanilla blossom, pear and peach pip and citrus flavours and ends with a smooth finish.

This wine consists of 92% Viognier and 8% Roussanne – all hand picked.To ensure early blending, the varieties were co-fermented. 30% of this wine was fermented in 4th & 5th fill French oak 300L barrels and 70% in stainless steel. The wine was stirred for a four-week period after fermentation, forcing the fine lees into suspension, creating this wine’s rich mouth feel.

A rose gold coloured Rosé with strawberry preserve, papaya and hints of fruit salad notes on the nose, supported generously with flavours of tangerine, quince jelly, saffron and elegant white spice on the palate.

To produce this wonderful character clear juice was racked off and 50% of the production was fermented in stainless steel tank and the other 50% was fermented in old 300L French oak barrels (5th and 6th fill).